​Concerns for a lot of things continue in the Church of the Nazarene.​   I am still finishing up translations, and when done, will post the General Assembly update and assessment of the “health” of the church sometime next week.  The prognosis is not good, although there remain some faithful and discerning churches; but will they survive?  Since General Assembly, more things have come to light that confirms the sickness spreading through the church.  Signs and wonders is now gaining a foothold in the church as you will continue to see in future reports.  The Gospel message is absent many times, yet our main concern is souls that need to be saved, and new Christians who don’t know better are being misled.  Thus our continued reports and exposing of even seemingly “small things” will not stop.  “A little leaven” comes to mind, and we cannot let these “little” things take a foothold, or as they say, allow the camel’s nose to get under the tent.​

For by grace you have been saved through faith. And this is not your own doing; it is the gift of God, not a result of works, so that no one may boast.  Eph. 2:8-9​

A Facebook group called Sacramental Nazarenes has proven to be an in-your-face declaration that Roman Catholic thought is here among many Nazarenes, including those in leadership.  This group is shamelessly promoting Roman Catholic thought, ritualism, and contemplative practices.  Yet, when we shine the light on them, some of them protest the fact that we are exposing them!

Now there is the increasing use of Roman Catholic imagery and icons.  For instance, a District Superintendent, Carla Sunberg, who is a member of Sacramental Nazarenes displayed on her Facebook page a gift of an icon depicting a “saint” from the Eastern Orthodox Church, Saint Macrina.

A little research about this “saint” tells us that she was the daughter of Basil The Elder, and a sibling of Saint Gregory of Nyssa.  She was engaged to be married, but after her fiancée died, she dedicated herself to her religion, becoming a nun.  Her younger brother Peter helped her turn her family estate into a monastery and convent.  Not surprisingly, Macrina was a monastic, and also was known for adhering to an ascetic ideal.  Asceticism is a lifestyle that is characterized by abstinence “from various worldly pleasures; it is “is the practice of strict self-denial as a means of attaining a higher spiritual plane.” (1)  She slept on boards and kept no possessions.  Many claimed that she had the power to heal others.

In Luke 9:23, it says: “And he said to all, “If anyone would come after me, let him deny himself and take up his cross daily and follow me.”  But asceticism takes this command to great extremes, including the inflicting of bodily harm on oneself, eating very little food, living in isolation, and other extremes.   Nowhere in Scripture are we told to purposely seek out physical discomfort or pain.  Yet, most of these saints participated in this unbiblical practice, to one extreme or another.

Regarding some of her beliefs, in his book The Ancient History of Universalism, Universalist Hosea Ballou claimed that Macrina was a universalist also, based on her writings, and that she believed that the wicked in purgatory would all eventually confess Christ.  Purgatory of course is one of the false teachings of the Roman Catholic Church and several other sister religions.  J.W. Hanson also cited her as a universalist in his book Universalism: The Prevailing Doctrine of the Christian Church.

So in responding to a friend’s questioning why she posted this picture (“Why? Are we Catholic now?”), Carla responded with this answer:

“Robert, I’m sorry you misunderstood this gift from my husband. I did my doctoral dissertation on holy women of the 4th century. The original holiness women. They were amazing and their lives even influenced John Wesley. The most famous of the women was Macrina. There are no pictures of her — only icons. There is no icon worship here — simply a gift from my husband representing six years of research that led me to understanding holiness in a very powerful way. This is much like having a picture of Phoebe Palmer. Therefore I am and always will be a Nazarene — but I also happen to be a professor of Church History, especially focusing on the early years of the church. May you too know the transformational power of the Holy Spirit who took a young teenage girl, Macrina and turned her into a woman who ministered to and helped to touch the lives of thousands of people in the region of Pontus and Cappadocia where she lived.”

Is holiness to be truly understood by the study of people who practiced asceticism and monasticism?  Does the Holy Spirit really motivate someone to “touch many lives” by leading them into practices that have no basis in Scripture?  Did Carla Sunberg miss answering this question in her six years of research?  John 16:13 says that “However, when He, the Spirit of truth, has come, He will guide you into all truth.”  Since practicing monasticism, asceticism, and universalist thought is not of God, then we can only conclude that Macrina was not transformed by the power of the Holy Spirit, but was changed by another “spirit.”  How could Carla Sunberg have missed this?

The continuing and growing trend of Nazarenes, including leaders and pastors, to embrace, and quote, and admire “saints’ of the Roman Catholic Church or Eastern Orthodox Church, and them claim they were great influences on John Wesley, is very troubling.  I am not trying to beat up on Carla Sunberg, because she is not alone in this “new phenomenon.”  But she is a leader in the church, and she was a serious candidate for General Superintendent this year.  As I have said before, the national leaders (General Superintendents) have let this go on without comment, giving their tacit approval for pastors and other leaders to promote “saints” who taught ungodly and works-based practices.

How far will it go?  Well, here, you see a Nazarene pastor at a confessional booth at St. Peter’s Church in Rome. 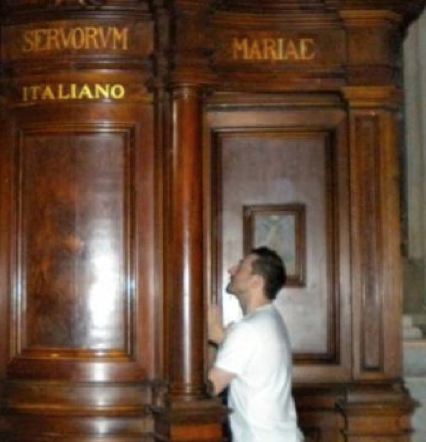 In his comments, this pastor said he wanted to remind his friend that he did not forget his roots.  Really?  This may well be his real roots, but apparently he has forgotten what the Reformation was about.  Perhaps he never heard of the pope’s “shock troops”, known as the Jesuits and led by St. Ignatius, who vigorously and enthusiastically persecuted and killed many Christians.  Yes, those roots; people who tried to deny ordinary Christians access to the Bible.  Apparently the seminaries are failing to teach history to our future pastors, and here is the result.

Am I missing something here?  Am I protesting too much?  Can the leadership at least put it in writing and officially declare what is already happening in the Church of the Nazarene?  At least hypocrisy can be set aside, and they can be forthright with the people.