This is the prayer labyrinth at Trevecca Nazarene University.  We put this photo of it here because the web page at the university’s website is gone.  All references to the labyrinth and the photos are also gone.  It was removed per order of Dr. Dan Boone, President of Trevecca, after several exchanges he and I had via email regarding the school’s promotion of contemplative spirituaity practices, including going on a retreat to the Abbey of Gethsemani in Kentucky.

To our knowledge, the school has not renounced the use of the labyrinth, in spite of removing any references to it from their website. 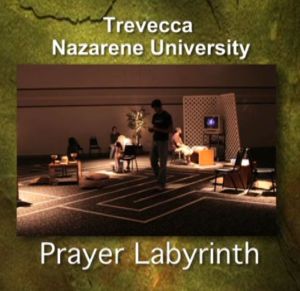 Here is Dr. Boone’s explanation of why he had it removed from the website.  The full exchange can be read at this link: Conversation With A University President

That is Dr. Boone’s explanation.  my question is, what difference does it make? Your students are still doing it.